I recently found out that this stands for “I Know, Right?”.

I think this is an odd expression, when the person claiming to know asks if s/he indeed knows in the same few words. Or does this signify the insecurity of the famed ‘next generation’?

Perhaps I’m too odd/old for modern acronyms and expressions, because I quite often run into several of those that hardly make sense unless they are based on insecurity. One of them is ‘like’, as in: “So I’m like ‘where are you going?’ “

There is nothing wrong with “So I asked ‘where are you going?’ ” but clearly that was not the point. Or the exact words were not used ad memory fails so the speaker asked “something like” that?

The Beatles’ visit to India in 1968 to study with Maharishi Mahesh Yogi brought the world’s attention to the Transcendental Meditation technique. This recent article in Great Britain’s newspaper, The Telegraph is a look at how the Fab Four were indeed ahead of their time.

Below are excerpts from science correspondent, Richard Gray’s June 11th article in The Telegraph.

It may have seemed simply a phase in pop history, but it seems the Beatles may have been on to something after all during their fabled journey to India.

Transcendental Meditation became synonymous with hippy culture in the 1960s after The Beatles embraced it following a visit to India where they were taught the technique by the late Maharishi Mahesh Yogi .

Now a growing body of research is suggesting it can have a positive effect on people’s lives.

Recent studies have shown that it can be used to treat high blood pressure and help people overcome psychological problems. The latest research found that US school pupils who performed the meditation technique had higher graduation rates than those who did not. Researchers found that Transcendental Meditation increased the number of students graduating by 15 per cent while among those with the lowest academic grades, a further 25 per cent graduated compared to those not meditating.

Professor Robert Colbert, from the Neag School of Education at the University of Connecticut, said: “Transcendental Meditation appears to hold tremendous promise for enriching the lives of students.” He added that the meditation technique was a viable method for turning around “poor student academic performance and low graduation rates.” 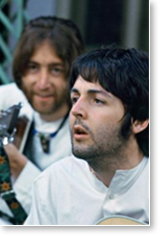 The Beatles’ time with Maharishi Mahesh Yogi, at his teaching centre in the foothills of the Himalayas in 1968, produced some of the most famous images of the Fab Four, dressed in white and draped in flower garlands. It was also one of their most productive periods musically, with Lennon declaring that between them they wrote around 30 new songs during their visit to Rishikesh.

The tracks, which ended up on The Beatles, also known as theWhite Album, and Abbey Road, include Back in the USSR, Blackbird, Revolution and Mean Mr. Mustard. 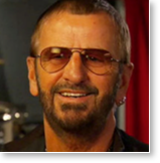 In an interview conducted in 2009, Paul McCartney and drummer Ringo Starr spoke candidly about how the meditation technique helped them. 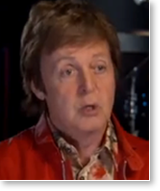 “It wasn’t all about meditation, it’s just you were focused – but yeah, there were very blissful moments. It is one of the few things anyone has ever given to me that means so much to me. For us, it came at a time when we were looking for something to stabilize us at the end of the crazy sixties.”

McCartney has also in the past called for Transcendental Meditation to be used in schools. He said:

“I believe that in the future meditation could be as commonplace in schools and society as eco-awareness is now. It interests me that an ancient cure may be the solution to a modern problem.”

The new research (on TM), which involved 235 students in their senior year at an urban school on the US east coast, was funded by the David Lynch Foundation.

Note: This page was updated on 2016-12-03. Truecrypt is no longer in use as it contained errors. If you want to find some alternatives for your system, have a look here.

A while ago I posted about a cheap way to keep your data safe in “the cloud”. Most people know Dropbox, Skydrive and Google drive, and that none of these systems are encrypted on your end. Because of that I installed Truecrypt and did some experiments.

Let’s set this as a case. You have 5MB of data you want to keep in the cloud. Dropbox gives you 2GB for free, 5MB fits in there easily. But your MBs are only encrypted by Dropbox, any CIA/FBI/NSA/TSA John Doodle can walk in and look at them. Dropbox will hand them the encryption key. Be one step ahead.

And why 10MB for 5MB of data? That’s to have some space for when your amount of data grows. You can make it 6MB, but when you get to 6.1MB of data, you’ll need to create a new container in truecrypt and copy things over. It’s just some planning ahead.

Hope this helps someone.

More than 10,000 live exotic turtles have been found in the luggage of two passengers at an Indian airport.

The two Indian nationals were arrested at the Netaji Subhas Chandra Bose International airport in Kolkata after customs officials discovered the reptiles packed in their suitcases.

“10,043 numbers of exotic varieties of the turtles have been seized from two passengers, residents of Chennai, who were coming from China to Singapore, and landed at Kolkata airport,” said assistant commissioner of Airport Customs, Nabnit Kumar.

The turtles were in three bags waiting to be picked up from a conveyor belt when they aroused the suspicion of customs officials, The Indian Express reported.

According to the World Wildlife Fund, nearly all species of sea turtle are classified as endangered and many are at risk of extinction due to human activities.

Increasing pollution, drainage of wetlands and commercial development tend to destroy the habitats and nesting sites of turtles.

WWF says that turtles are also endangered because of poaching, being slaughtered for their eggs, meat, skin and shells, and falling prey to over-exploitation.

An investigation has been launched into the attempted smuggling case.