Note: This page was updated on 2016-12-03. Truecrypt is no longer in use as it contained errors. If you want to find some alternatives for your system, have a look here.

A while ago I posted about a cheap way to keep your data safe in "the cloud". Most people know Dropbox, Skydrive and Google drive, and that none of these systems are encrypted on your end. Because of that I installed Truecrypt and did some experiments.

Let's set this as a case. You have 5MB of data you want to keep in the cloud. Dropbox gives you 2GB for free, 5MB fits in there easily. But your MBs are only encrypted by Dropbox, any CIA/FBI/NSA/TSA John Doodle can walk in and look at them. Dropbox will hand them the encryption key. Be one step ahead. 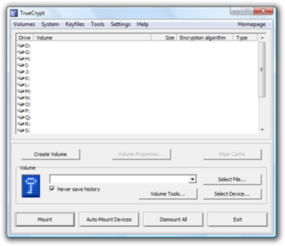 And why 10MB for 5MB of data? That's to have some space for when your amount of data grows. You can make it 6MB, but when you get to 6.1MB of data, you'll need to create a new container in truecrypt and copy things over. It's just some planning ahead.

Hope this helps someone.