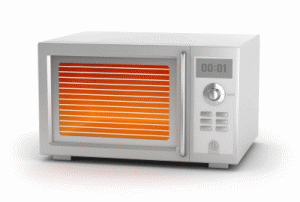 I can remember the days growing up in the 1950′s and 1960′s, when we prepared foods without a microwave oven. Water was boiled on the stove. Chicken was baked in an oven. Vegetables were steamed, baked, or sautéed. Food was whole and fresh. Even a TV dinner was baked in the oven, which took about 15 minutes to warm. And then, modern science and technology brought us the microwave oven that could heat food rapidly, from 30 seconds to a couple of minutes.

The industry has claimed that microwave cooking protects the nutrient content of foods. Somehow, in tasting foods that came out of a microwave oven, the texture was changed as was the flavor. Foods cooked or reheated in microwave ovens became rubbery and lacked the savory smells and layered flavors that come from cooking foods slower and longer.

Does this mean an occasional microwaved meal will be harmful? Not likely. But what about a steady diet of eating foods cooked at such a high heat? Do the sensitive compounds in food, such as amino acids, fatty acids, vitamins and phytonutrients change? It appears so. Read on to follow the scientific literature surrounding the depletion of our soil, foods, and health as a result of modern farming, food processing, microwave cooking, and not eating enough fresh, natural, uncooked, organic whole foods.