I had to do it. It took a long time before I got it right, then I had to work hard on getting the OpenTheremin to cooperate, but it happened in the end.

It’s not perfect, but I’m satisfied with this first attempt to do a mix with 2 different theremins.

For this video I used my Moog Etherwave Standard, and the OpenTheremin v4. I also used the karaoke track for the music as found on Youtube.

The audio was mixed using Audacity and the video was created with KDEnlive on Linux.

Unwoman? Strange name, you may say. Unwoman is a San Francisco based Steampunk artist. She’s unique in my opinion. The way she uses a cello (well, several cellos)  in her music is very special, very different to e.g. Rasputina.

I have all her work, including her latest achievement, “Lemniscate, uncovered 2”, which is an amazing collection of covers of more or less known music. (This of course depends on what you know.)

I had the pleasure of meeting her once in London, where she was on her first ever tour outside the United States. With each album she produces I appreciate her music more. She’s still growing as an artist and performer, and helping her achieve her goals (through several kickstarter projects) is really something worthwhile.

Here is a youtube video of one of her amazing songs, The City:

If you want to learn more about her, do visit her website at www.unwoman.com.

Yes, as you may have guessed, this post is about music. For me music is an important part of life. Without music (and my writing) life would not be life as I now know it, and much less valuable.

This post is about 2 ladies I discovered through the marvel called Internet. They are twins and they both play harp, and their names are Camille and Kennerly. Many people will perhaps stop reading here, but they won’t know what they miss. 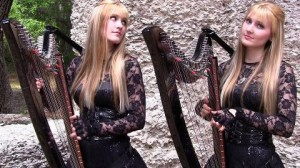 Harp? Yes, harp. It’s a beautiful instrument. I never played it, but I have lots of harp music ranging from Händel’s harp concertos via Lisa Lynne Franco to – indeed – Camille and Kennerly, and how these two ladies make their harps sing is amazing. For example this song, Asleep, by the Smiths (tip: listen with proper headphones to get the most out of the music!):

Before you think that harp music is only for the slow, the sullen and the sleepy, have a taste of this: Don’t fear the reaper, from Blue Öyster Cult. (Sorry about the off-site link, for some strange reason this video won’t show here.) 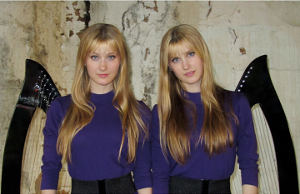 So, what is so special about these twins? First off, they’re twins who both share a passion for the same instrument. Not so common, I think. Next is that they are independent artists, not signed up with any big label, not sponsored by large amounts of money. They do everything themselves, which strikes a chord with me being an indie writer. Indies do everything themselves. Everything:

They even move their own harps into the most impossible places, and they arrange their own videos. And, as they told me on their Facebook page, they once shot a video in a field where they were almost consumed by mosquitoes. One cannot other than appreciate such dedication. As indie artists they are also very approachable via for instance Facebook, they like very much to interact with their fans. And they have plenty of those (but there’s always room for more).

For Game of Thrones fans (count me in), they did a wonderful rendition of the title tune!

If you want to learn more about the Harp Twins, you can visit their website at Harptwins.com, or their Youtube channel. Their music is available through itunes and CDBaby.

All photos used with permission of the Harp Twins. Thank you for that, ladies!