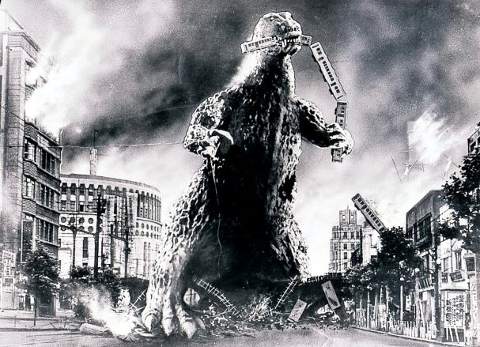 Do you know or remember this friendly fellow? Most of you will recognise him (if you do) as Godzilla. As I was driving along today I heard the song of the same name by Blue Öyster Cult.

In this song a Japanese-speaking man clearly mentions “Gojira”. Incidentally the same name as they give Godzilla in all the Japanese films about this train-munching fellow. Then I suddenly had a thought. In Japanese the creature is called Gojira (Japanese has no L). Then why is it know as Godzilla? Is it because most people can’t pronounce the ‘r’? Hardly. The original film by Ishiro Honda (1954) is called Gojira (in Japanese), which is not much a surprise. Again, why is the animal now known as Godzilla? Was there someone who thought “Oh, these Japanese can’t pronounce an ‘L’ so they probably mean Godzilla, not Gojira”?? This really puzzles me. Why didn’t they just stick with the original Japanese name for a Japanese creature? They didn’t change the name of other Japanese things either, I mean a Toyota is still a Toyota.