Every year again, and perhaps even stronger every year, I see how humanity is doing the wrong thing when the darkness of nature comes along. Autumn, Winter, the seasons where nature slows down, settles inside itself to rest for a new period of bloom when Spring and Summer come. And what does modern man do? The same thing as usual. Running around as fast as possible, working harder and harder, lighting up the darkness with even more lights. Everything to pretend that there is no wheel of life, that there are no seasons and – most importantly – that they are absolutely not a part of this nature thing.

Many people I know will say that this is natural, that it’s always been like that. Well, that’s wrong. Before the flooding out of darkness with big lights, people lived in sync with nature, going fast in the light and slowing down in the winter. A natural pace.

It’s in a way understandable that modern man doesn’t want (or worse: isn’t allowed) to follow that rhythm. Modern man has to obey the laws of work, the company, and most certainly the money-machine that demands labour regardless of moment. All that because the most important things in life have been eradicated for the greater good of – … consumerism? Work? The boss? Your country? Does all that mad running around make you happier, or a better person? No. Say yes all you want, I don’t believe the word of it. 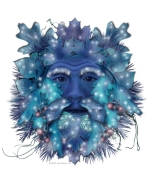 Money has taken over the world.
I say: let’s take the world back. Let’s take life back.