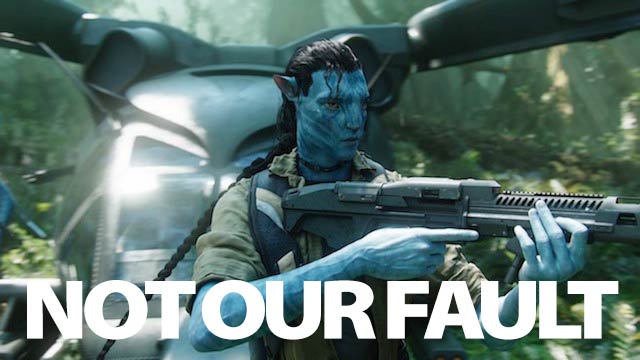 This Is Why People Pirate

Do you know why people hate movie studios? Why, increasingly, they’re driven to download content illegally, even though they’re perfectly willing to pay for it? Because of crap like this:

LOS ANGELES, CA. (August 14, 2012) -– The world of Pandora has never looked better as over 33 million AVATAR Facebook fans were the first to learn of the upcoming release of the AVATAR Blu-ray 3D Collector’s Edition, debuting globally beginning October 15, releasing in North America October 16, from Twentieth Century Fox Home Entertainment. A home entertainment experience like no other, for the first time ever, fans will be able to welcome James Cameron’s global box office sensation into their homes in stunning 3D high-definition.

December 10, 2009. Avatar is released in theaters and goes on to become the highest grossing movie ever. Adjusted for inflation, it’s number two all time. On April 22, 2010, it is released on DVD. It’s now August 14, 2012. In what world does it make sense for the movie that basically defibrillated the entire notion of 3D movies to take three damn years to make a wide release on 3D Blu-ray? Ours, apparently.

Here’s how we got here: Panasonic got in bed with Avatar early on, promoting the film with103 trucks with giant 3D TVs on them. That was kind of cool, actually. But then, it turned out you could only buy the 3D Blu-ray with a Panasonic 3D TV. Which turned out to cost, all things considered, about 300 damn dollars for a $30 Blu-ray, no matter how you spun it. Totally dumb, totally anti-consumer.

So what did we do? What were we basically invited to do? We pirated.

As of October of last year, Avatar was the most pirated movie ever. 21 million downloads and counting. Sure, a lot of those were shaky cams, but how many were 1080p downloads and oh-hell-good-enough DVD rips were included in that? Probably a lot.

And the most infuriating part? It’s not like Panasonic got anything out of it anyway. In justJanuary to March of this year, it lost more than $5 billion—much of that in TVs. Is any significant portion of that due directly to its screwing with people who just wanted to buy and watch Avatar on their damn-expensive 3D TV? No, of course not. But it’s also clear that no one is ever going to buy a Panasonic 3D TV just because it has an exclusive on Avatar.

This is less an indictment of Panasonic or FOX’s business acumen—which, you know, speaks for itself—than an illustration of exactly how little consideration is given to us, the paying customers.

All of this matters. Especially right now. Demonoid just went down for the count. The RIAA and MPAA want the US to stomp on the Pirate Bay the same way. And we’re just a few months removed from the Supreme Court declining to hear an appeal for a $675,000 fine levied against Joel Tenenbaum for, as a teen, downloading a few dozen songs. The subtext is clear. It’s not even subtext—it’s super-text. We are the assholes. It’s our fault that movies are bad and the music industry can’t figure out how to monetize itself. And the copyright gestapo is coming for us. That’s the message, the threat, looming over every idiotic decision that pushes us closer to BitTorrent.

It’s not a new song. Big content has been struggling for years to figure out how to stop shooting itself in the feet and legs and genitals and torso on digital content. It’s Apple taking years to drop its draconian DRM from iTunes sales. Or it’s Amazon—the biggest bookseller in the world—locking down its own ebooks, even though they often cost exponentially more than simply buying a paperback. Or even Adele, lovely Adele, not having 21 on Spotify because her people didn’t want free customers to be able to listen to her. And it’s certainly HBO tying its brilliant HBO Go streaming to an archaic cable subscription. Buying things, or getting them legally, is still a giant pain in the ass. Insanely, counterintuitively, infuriatingly, it’s even worse for especially popular content, like Avatar or 21.

So what’s the other side of this? People want to pay for things. Spotify’s paying subscription base has grown 50 percent over the past six months. Apple is making billions from content sales. Even Netflix is on the comeback trail, after pantsing itself with last year’s Qwikster debacle. Make it easy, make it good, and people will pay.

Until then? Enjoy your three-year-old Blu-ray. Or just pirate it.

One of the comments:

What bothers me is paying extra for things that I want because they’re inextricably bundled with crap that I don’t want. For instance, the Avengers comes out on video next month. I have a Blu-Ray player and an iPad, and ideally, I’d like to just buy a Blu-Ray that comes bundled with a digital copy, but frankly, just the Blu-Ray disc would be fine.

Moreover, if I chose to buy the Blu-Ray and the digital copy separately, it would cost me about $50 total just to be able to watch the same movie across multiple platforms.